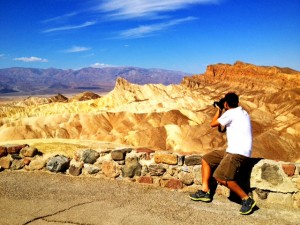 Death Valley is an extreme desert land area located in Eastern California. The specifics of the area are that it is located within the Mojave Desert, and is physically the lowest area (282 feet below sea level at the Badwater Basin) on the North American continent. Oddly enough, this point is only 84.6 miles from Mount Whitney, which is the highest point in the United States at 14,505 feet. It is also is the driest area in the United States, measured through rainfall amounts on average of 1.5 inches. The heat in Death Valley is extreme, and the area holds the world record for the highest reported temperature on earth, which happened at Furnace Creek on July 10, 1913 when the temperature went to 134 degrees Fahrenheit. Although there was a similar temperature measured in Libya in 1922, the World Meteorological Organization could not verify it, and thus called it invalid. Death Valley is officially the hottest place on the face of the earth, but Death Valley tours are comfortable and beautiful.

Death Valley is located on the border of California and Nevada, within the Great Basin area of the Sierra Nevada Mountains. The majority of Death Valley National Park is made up of Death Valley, and it is the highlight and main feature of the Mojave and Colorado Deserts Biosphere Reserve. Death Valley itself is an area of about 3,000 square miles.

Tours of Death Valley will concentrate mainly on the beauty of the extreme geology and landscape, and educate visitors about this unique area in the world, as well as what produces the attributes of the area. For example, one of the very unique features of Death Valley is that it contains “salt pans,” which was left behind when inland seas (once called Lake Manly) evaporated, leaving behind an extreme amount of salts like borax and sodium. Additionally, Death Valley has a climate that is referred to as “subtropical desert,” which means that it has extremely hot summers and almost no rainfall. Atmospheric pressure at low sea levels causes higher temperatures because of the sun heating the ground and radiating upward, where the weight of the air in the atmosphere pushes it back down. The pressure creates a “trapping effect” which allows winds to push hot air around and distributes the heat to all areas, even if they are shaded. The geological aspects of the area work to produce an effect that is much the same as the way a convection oven works. This creates a barren landscape where few plants can survive. One of our highlights on our Death Valley tours is to walk the salt flats at Badwater Basin.

There are many interesting weather anomalies that have occurred at Death Valley. From 2005 to 2007, above average rainfall created “Lake Badwater” when the Badwater Basin filled with a pool of green rainwater that stretched nearly the entire way across the valley floor. This is the periodic occurrence that created the salt flats, and although it has been occurring for thousands of years, it is quite rare. By 2007, the area had been evaporated back to the more familiar barren, waterless landscape. Additionally, flash flooding in the area has caused braided streams that erode the desert floor in unbelievable patterns.

Death Valley is home to the Timbisha Tribe, who have inhabited the area for more than one-thousand years. There are still Timbisha families living at Furnace Creek and Grapevine Canyon. This area is home to some of the favorite features of Death Valley Tours, including the Borax Museum and Zabriskie Point, The Devil’s Golf Course, Dante’s View and the Twenty Mule Team Canyon. Death Valley was formerly known as “Maahunu” (translated as “canyon”) and received the English Name “Death Valley” in 1849 by prospectors coming to the area in search of gold and silver. “Death Valley” was probably more of a comment on the extreme heat of the area, because only one death was recorded in the area during the prospecting rush.